JE MacLeod, author of Waiting To Score, posted a really thoughtful post about plastic surgery, body image, and self confidence on her blog today. Her inspiration were these photos of The Hill’s star Heidi Montag who recently had several plastic surgery procedures done at the young age of 23. Here are the photos, but make sure you check out JE’s blog post: http://jemacleod.livejournal.com/158148.html 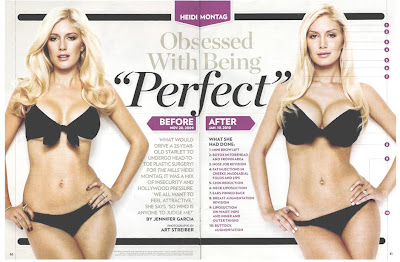 I’ll just add that it makes me incredibly sad to see beautiful young women obsessed with their appearance when so many other personal qualities matter much, much more. I’ve never known anyone who found happiness solely through personal beauty. My bet is that Heidi won’t either.

Over the weekend I read about how this new reality TV show, NYC Prep, was causing lots of controversy and angst among the private school folks in New York. Yes!!! It sounded like fantastic treadmill television (and I am kind of missing all that over-the-top Gossip Girls drama).

Let’s just say I didn’t get a really heart-revving workout. I watched kids shop for expensive shoes. I watched kids shop for expensive clothes. I watched a girl order a salad at an expensive restaurant. Even the one guy’s therapy session was dull, dull, dull. The most interesting part of the entire show was watching a girl pick at her mud mask while talking on the phone in a jacuzzi filled with lemon halves (she looked ridiculous).
The “regular” teens I know are much more interesting (and interested), witty, and pull together super cute outfits–with stuff they bought on sale at the mall.

I woke up early this morning, exercised, ate my Cheerios, and primped–for my very first radio interview. I know, I know I could’ve done it in my pajamas, but I felt really nervous–about my nose. Crazy, huh? No one sees you on the radio.

Blame it on a Seattle DJ.
Back when my husband (then boyfriend) was a ramen-eating grad student, he supplemented his non-existent income by winning radio contests. He won concert tickets, CDs, and lots of cash. Every day he called into the “Use Your Noodle” contest on KXRX. He’s a smart guy with a great memory and probably played too many hours of Trivial Pursuit, but it paid off in radio contest wins.

But they wouldn’t let him win every day or even every week. So he’d make me call in.
DJs have to be funny. I understand that. And the easiest way to be funny: make fun of someone else.
I don’t remember the Use Your Noodle question. I don’t even remember if I got it right. All I remember is the witty female DJ laughing about my voice and saying something about “nose timber.” Now she might have meant “timbre” (the sound or quality of a voice). But I envisioned my nose stuffed with Giant Redwood trees.

My Big Huge Nose stuffed with the world’s largest trees and making me sound really, really, really bad on the radio.
And it has stuck with me all these years. It didn’t help that I woke up sniffling with allergies this morning. Nose Timber!!! But I have to say that the radio interview turned out to be fun. I love to talk about writing. And Rachel Hanel at KMSU in Mankato, Minnesota conducts a very nice (and friendly) interview.
Now that I’ve taken an axe to my fear of nose timber, I’m actually excited to do it again sometime.

So how come American Idol judges never tell a guy that his singing was only so-so, but his “butt really looks great in those jeans?” So many times the judges will start a female contestant’s negative critique with something along the lines of “you’re a beautiful girl.” The guys rarely hear those kinds of comments.

Last night Jeanine Vailes was told by more than one judge that her legs looked great. Hello?!? She’s trying to improve her singing. How is that possibly constructive? And how am I supposed to convince my teenage daughter that her thighs are just fine (and she doesn’t even sing!).
You can see it all here (fast forward to 1:44)