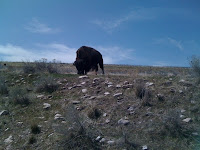 One of my favorite author friends, Joy Preble, visited Utah last week, so I took her on a short adventure to Antelope Island. Where else in the world can you see bison roaming on an island in the middle of a huge, salty prehistoric lake? 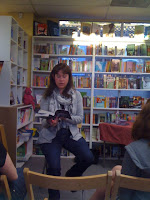 I also attended Joy’s book signings to celebrate the release of Haunted, the sequel to Dreaming Anastasia. Joy was also kind enough to kick off my new On The Go questions.


Leave a comment and you can win your own signed copies!

1. You have been given your Dream Vacation. Where are you going & what are you doing?
I am actually planning for one of my dream vacations – probably year after next if we can save enough money. We will be going to Australia and New Zealand to see everything we can see – including Sydney, koala bears, and the gorgeous scenery where they shot Lord of the Rings. I can hardly wait!!
2. What if you could travel to a different time period?
I’d like to travel to turn of the 20th century NYC and have tea at the Plaza Hotel. Because seriously, who doesn’t want to do that? I could do that every afternoon, actually. Wouldn’t that be amazing?
3. Are you a planner or a seat-of-the pants traveler?
I’m a ridiculously OCD-type over-planner. Just ask my husband. He referred to one New York trip as “The Bataan Death March of Vacations.”  I read travel guides. I search on line. I map quest like a mad woman. I ponder. I make lists. My lists make lists. I have plans for vacations we might never get to. It’s scary.
4. What’s the worst thing that’s ever happened to you on vacation?
One time – on a spur of the moment trip to San Antonio and Sea World, we got to the hotel and the clerk said, “Your room isn’t ready.” What she meant was that this hotel was still being built and our room (which we’d booked from a central reservation line, not the individual hotel) wasn’t actually built yet! But as it was late and every other hotel in the area was booked, they put us up in what had been the hotel night club. We were awake all night with the neon flashing in the windows. I guess that’s more funny than awful, though.


Find out more about Joy Preble at http://www.joypreble.com/

Now it’s your chance to escape into adventure & romance based on Russian folklore. Leave a comment to win a copies of Dreaming Anastasia and Haunted.
Contest ends on Tuesday, April 19, 2011.