Yesterday I dropped my daughter off for her first day of 10th grade. Usually I drive away cheering the return of long uninterrupted writing days, but yesterday I found myself growing tearful, a bit nostalgic.

In 10th grade I started becoming myself. That year I began keeping the daily journal that would eventually give me the courage and voice to write fiction. I also started fighting against my failures. After a truly embarrassing drill team tryout at the end of freshman year, I decided to take ballet lessons and try again. I dragged my curvy post-pubescent body to a class of slim 5th and 6th graders. But I did make the dance team the following spring. And I’ve been working to overcome my failures ever since!

So while I happily dig into long days of writing, I’m wondering who is my daughter about to become?

My daughters skipped school yesterday & I ignored my laptop so that we could meet President Jimmy Carter at his book signing at The King’s English in Salt Lake City. 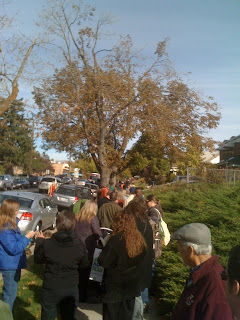 We waited in a line that stretched three blocks from the bookstore, but only two and half blocks from Starbucks. The hours went fast as we chatted with fellow Jimmy fans. Plus, the bookstore handed out patriotic taffy to the crowd. Local businesses handed out coupons–I can now get my dogs washed while eating a bucket of discounted bagels. And, of course, campaign volunteers took advantage of a captive audience. I will now be spending an hour making get-out-the vote calls on Monday.

All our local newscasters milled about with their satellite trucks and cameras. My daughters swear that the backs of their heads made it into one of the interviews as they waited in line for hot chocolate. 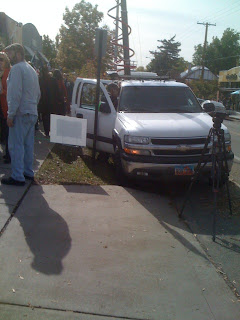 We finally got closer… 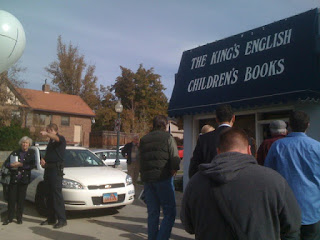 And it was over in a flash. Jimmy Carter signs fast! But he made eye contact and spoke to everyone in line. To my youngest he said, “here you go, sweetheart.” So cool. The other cool thing: he sat right next to my YA novels on the bookstore shelves! I like to think that maybe as he finished signing, he thought: I must learn more about these Big Noses And Other Natural Disasters. Or maybe he thought, I lust in my heart for that girl on the Swoon At Your Own Risk cover. 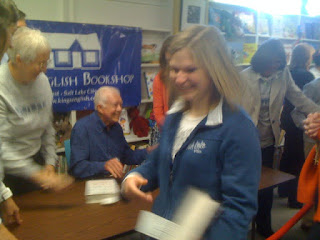 What’s not so cool. We could only take one photo–after we signed. So everyone has pictures of the people behind them in line. Some people traded email addressed to swap, but I lost sight of my line pal. 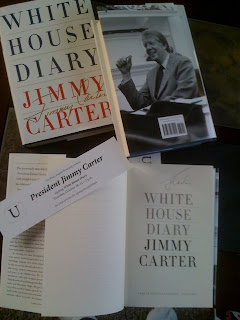 Afterwards we lunched at Caputo’s Deli. And maybe we didn’t rush right back to school, but stopped at the Red Balloon toy store. And we might have been spotted trying out a new cupcake place… 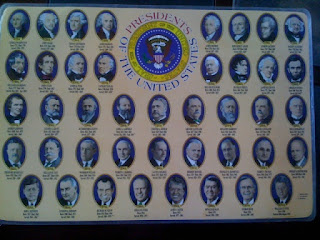 After all, it’s not every day that you get to meet one of the guys on your presidential placemat! 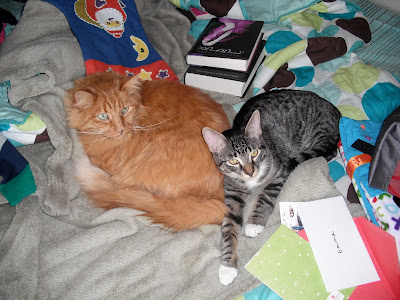 It took a few days, but now Otis and Magnum snuggle together like old chums. I also wondered how this small cat would get along with our large dogs. 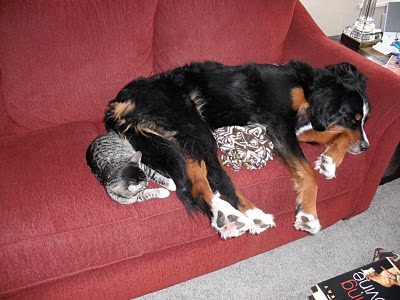 Otis loves Jack and Rosie–and even sneaks under their legs to snack on their food! He also loves to hang out with our tortoises, Sunny and Sandy. 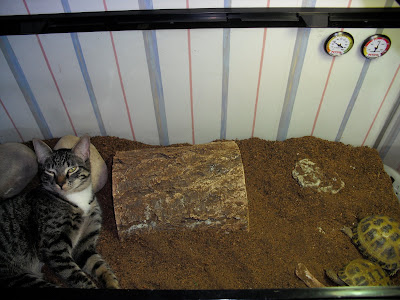 We now make sure the tortoise cage is covered. Otis still tries to share their sunshine. 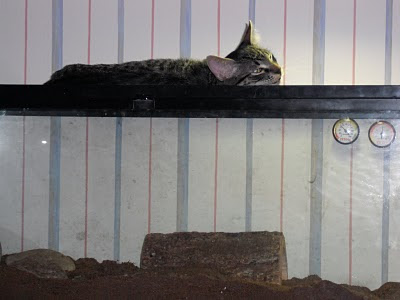 One day I found Otis snoozing on the tortoise cage while Sunny munched on his broccoli right below him–not caring even a little bit about the large shadow of a cat looming above. Now if only Otis didn’t want to be a writer… 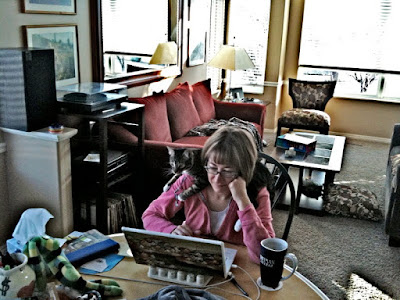 At least he keeps my neck warm.

So back when I was a freshman in college and got stuck in biology instead of the creative writing class for which I’d pre-registered, I never imagined this: 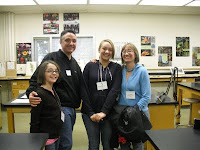 You see, there was this cute soccer player in my biology lab… And our love blossomed even with all the formaldehyde scenting the air. Our professor even came to our wedding. And last weekend he came to see us during our Whitman College reunion. He told the people on the biology department tour about our laboratory love story so everyone insisted that we take a family photo in “our” lab.

I never did take a creative writing class at Whitman (I minored in biology). But that worked out too. Sometimes you’ve got to embrace the twists and turns in life! 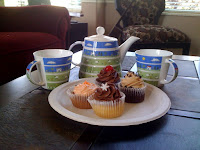 Having spent too much time at the car repair shop today, making my daughter miss her guitar lesson after she’d actually practiced, I figured that a stop at the new cupcakery (isn’t that cute?) was a good idea. Okay, cupcakes are always a good idea.

Turns out it was Cutsie Cakes grand opening! A cupcake blogger (why didn’t I think of that?) was even in the shop having her first taste. I ordered four of the seven flavors and planned a surprise after school tea party.
I had a lovely chat with my daughters over cupcakes and tea (something about tea makes us all behave). My 8th grader talked about a lunch time water fight with a guy in her class, but she wouldn’t admit to any level of hotness or crushingness. My 4th grader talked about loving math (yes!). I talked about how my friend Kaylie showed up to writing group today with a great nonfiction article and an amazingly revised short story plus a new query (she’s an inspiration!).
All the cupcakes were delicious and I kind of regretted not trying the lemon ones. Next time! 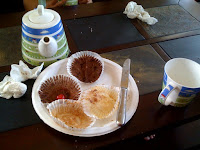 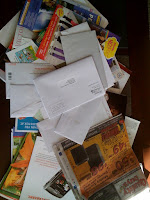 150 + emails to read, loads of snail mail to sort, and all that laundry… So what did I do? I snuck off to the movies with my husband!
I’ll write up my SCBWI conference tidbits tomorrow. And eventually I’ll get around to washing all the Lake Powell sand out of my clothes.